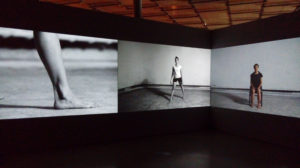 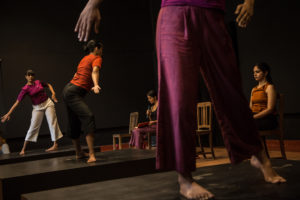 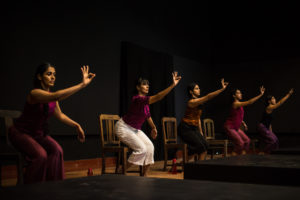 A contemporary choreographic performance, looking at the relevance of the mudra (hand gestures) – seeking out their contemporaneity. A varnam is the central section of a Bharatanatyamdance performance, made up of two types of dance: one narrative, made up of sung words; the other – the jathi – an abstraction of voice and rhythm, for pure movement. The dancers sing the words, developing a particular body language with the jathis, created by an investigation of the inner distances and proximities of time and body-points.

In this work, this Varnam that re-engages this iconic material and music, the dancers bring references of contemporary texts and contribute their own personal voices of womanhood, body and sexuality, at the same time keeping in mind the long history of a distinctively stylised ‘physicalisation’ associated with the original text. Thus this contemporary process of revisiting ‘Mohamana’ involves critiquing the content, welcoming or ignoring references as per relevance and proposing compositional possibilities that lay bare a musical masterwork for the audience, far removed but not decontextualised from its traditional content. Whereas in its traditional form, the dancer and the music tell simultaneous literal stories, here the performers search for parallel, often dissonant voices. Eventually the movement language that has been recognised for decades as the Varnam is replaced by a ‘body-vocabulary’ that matches the rawness that the music holds. It leads us closer and closer to an understanding of what Bharatanatyam is, when removed from its traditional context.